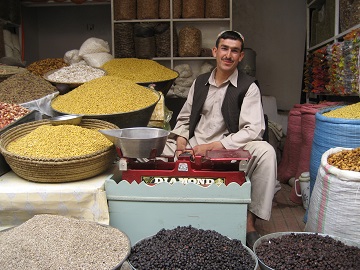 Perched high on steep mountainsides, Nuristani Ashkuni villages maintain an ancient adjustment to difficult circumstances. Mountain trails are not suitable even for mules, and one must walk almost everywhere. Villages range from 30 to 300 households surrounded by terraced fields fed by miles of tortuous irrigation channels.

Located in 5 main valley systems with a number of tributaries, each drainage area speaks its own dialect (Kati, Waiqali, Ashuni, Paruni). Suspicious of outsiders, even Ashkuni from a few miles away, everything is regulated by village level consensus based on centuries of experience that have ensured survival.

Strict rules enforced by public opinion and an elected village group specify the order in which fields are irrigated and when the men must move goats and sheep to different pastures.

Until a few years ago, the way to gain status in the highly competitive Ashkuni society was to stage a raid or give a feast. Today, raids have been replaced by oratory since Ashkuni culture also respects skillful public speakers.

Ashkunis also like to be known for honesty, impartiality, and wisdom. An Ashkuni who is considered successful possesses several sons, many goats, and a generous nature.

In 1970, twenty-six distinct Ashkuni dialects were discovered as researchers visited the isolated valleys and mountains of Nuristan.

What are their beliefs?

For over 800 years they held out against the Muslim tide that threatened to sweep into their valleys. Traditional prestige was marked by how many Muslims a young man killed in raids. But in 1895-6 these valleys were conquered and were forcibly converted to Islam.

The numerically dominant Muslims changed their name from infidels to "Ashkuni" that is "Land of the Light." Islam had finally triumphed in these mountain villages.

Each village is made up of several named wards, each with its own mosque and its own leader who acts to mediate disputes and to deal with the government.

After the end of the war against Russia, one million refugees were deported back in Afghanistan. The Ashkunis in their homeland will be less isolated than in the past. Agricultural and medical teams, among others, will be welcomed.

There is no known translation work being done among these peoples, and as recently as 2011 eight foreign medical workers were ambushed and killed in Nurisan, most likely by Taliban outlaws.

From Nuristani Peoples to Afghanistan Peoples

Return from Nuristani Peoples to Home